As a pixel Domme – as I affectionately call myself – who doesn’t post pictures of themselves and has in the past used content, I think the term catfishing gets overused and not by its definition. Mostly by people who think catfishing means when someone looks different without makeup, or doesn’t look like their avatar. If I looked like my avatar I wouldn’t be able to walk.

It’s also used by people who have no clue how SL works. So here I go on a rant about the term catfish, and why some of the reasons it’s used, are dumb as hell. Sometimes I get tired of being nice, and I get downright rude. Someone’s going to be offended by this. Someone who lacks compassion, reading comprehension, or has some superiority complex. Yall will be alright. So let me start by choosing “soft” violence, and saying this:

Unless the person is a cam girl, or planning on doing meet ups, or dating, or marrying someone, there’s absolutely no reason for them to share their real photos with you.

I said what I said.

Now I don’t have issue with what anyone chooses to share in the realm of adult entertainment, because this is what we’re doing.

However what we’re not going to do is start trash talking other SWers because of how they choose to run their business.

The first time I heard the term catfish, was when the tv reality show of the same name came out. A catfish was someone who impersonated/pretended to be someone else for attention, love, world peace, gold, all the tea in China…

Now the catfish definition has been broadened to include:

Women who look completely different without makeup. It’s…. makeup…. you’re supposed to look different when you put on makeup, that’s the point. Yall are weird.

Women (sometimes men) who cater to the catfish fetish. Yes. It’s an actual fetish. If you tapdance the path of findom, and risque thrill seeking kinks, you might have a fantasy of being scammed and hung out to dry. I don’t kinkshame, nor do I Domme shame anyone who does this.

Women who play personas ie: Phone Sex. If I talked about this 10 years ago I’d get lynched for it. It’s a pso dirty little secret. Phone girls are the original catfishes, because when the industry launched, it was a fantasy entertainment service, therefore not everyone used their real pictures, and it’s a pso’s prerogative to share their real information. And it still is. You pay to talk to a hot big titty blonde and that’s what you get. No questions asked, no strings attached. You jerk off, jill off, and both you and the mystery sex kitten go on about your day. And shocker: People still to this day use phone sex services. Anonymity is still important to people with hard cocks and throbbing pussies.

Who the person was in real life was none of your business. And it’s still none of your business, because you are paying for a fantasy entertainment service. Some of yall need to be hit with a brick because the concept of how and/or why is beyond you. I blame your poor parenting and lack of comprehension skills.

People on virtual who look nothing like their avatars. Ie: Men pretending to be women, women pretending to be men. Think Black Mirror where the two male besties have dirty nasty sweaty monkey sex in a virtual game where one of them is a…. *drumroll* big titty blonde martial arts avatar. His homie was a chiseled male avatar but that’s besides the point. Men on sl don’t care who you are in rl as long as they can fuck you. True story. Disclaimer: SOME. Because I know yall get all huffy when you’re masculinity is challenged…

SWers who choose not to divulge their real identity, use “cartoons,” avatars (that’s me), and there are many reasons – one of them being safety – why someone would not disclose who they are. Safety is the reason we vet customers; safety is the reason some content models and Femdoms don’t do meet ups. Plus some men can’t differentiate between real life and fantasy, and try to use phone sex and model cam sites to find a wife. The likelyhood of you “hooking up” with an online only service provider, is slim to zero.

The likelyhood of you hooking up with a Pro-Domme who will literally laugh in your face…. do I really need to say it?

And it’s not just younger people doing the bashing, age is not a factor in cattiness for some. However the industry has changed a lot since I started 10 years ago. 10 years ago there was no OF, for starters. Now I get some people feel pressure or feel threatened by content models, I don’t. I think they’re great, plus the fact that there is something for everyone in this industry.

The whole point of – specifically – SL is that it is your “alternate” life, if you will. A virtual world without limitations. So shaming someone for not being who they are in real life – when over 90% of users are not who they are in real life and by choice – is just stupid to me. I just tossed that number out, I have no idea how many people use personas on sl. The bottom line is that nobody – even the women and men who use their real life pictures – looks like their avatar in real life. There’s maybe a handful of people I know that actually look like their avatars. So get over it.

Accusing someone of catfishing on SL is like accusing a black person of being reverse racist. It’s silly and trite. Unlike blackfishing – which is harmful due to racism – catfishing on SL is a community activity. No one really strives to look like themselves, or at least, very few do so. Calling it catfishing is incredibly stupid, because is your next door neighbor really catfishing as a tree, a furry, or a unicorn… or Doja Cat? (There really is a Doja Cat avatar and she is fierce.)

Someone messaged me and accused someone else of catfishing on SL………….

Are you dumb? It’s SL where everyone is 22, and half the women are really men, and gender bending happens daily. I don’t care because I’m not tryna fuck any of them. (loud obnoxious laughter) Virtual is the magical fountain of youth. And people from all walks of life use it, including sex workers. So miss me with shaming anyone for using a picture of (insert famous super sexy hot person) to model their avatar after. I do not care. And no, not just because I don’t post real pics online. It’s because it’s none of your motherfucking business.

Catfishing Fetish Or Not, No One Cares

You think you’re better than those of us who choose not to show our faces, or use someone else’s pictures if you really want to go there? No sweety, you’re just younger, and your tits haven’t fallen yet. I’m not being mean, I am simply being honest. My tits are not where they used to be either, but they still look great in a vneck or a bikini.

This is not a diss to any young SWer’s, this is just me saying pipe down and stop bashing so called “catfishes” who don’t share their real life with customers. Or with anybody. Because you could be making your paper and minding your business. Also consider that being uncouth can get people killed.

If your customers like YOU and what you do, focus your attention there. Just understand that depending on what type of service you offer people, you don’t necessarily have to do a face reveal nor do you have to shame anyone who chooses not to. And the only people who care about who’s who are people who need therapy. Intense, ongoing psychological counseling.

I’ve had this on my mind for a while now. Will I ever reveal who the mastermind is behind Nicole? Not any time soon. You will have to be content with Nicole’s avatar mommy milkers and her big fat pixel ass. Because my big fat fine ass enjoys my life, and the safety of me and my loved ones. Also some of yall are weird as fuck. Creepy weird. Like stalking OF models weird…. so no thanks. And also leave those people alone, they are trying to support themselves, not be your baby mama or pick out fucking curtains, or worse end up in the trunk of a car.

To those who work in the industry, please support your fellow SWers. And if you are one who’s been wearing the “I bash catfishers” shoe, maybe focus on your business and shut the fuck up. And especially if you are on sl shaming people. Baby those people don’t give a fuck about you or your opinion.
Have you ever heard the term “pick me?” That’s what you sound like every time you get on a soapbox bashing other creators. Or using terms like “I’m a real girl not like those others.” Girl shut up. We’re all real and with varying degrees of ass and titties and cellulite.

At the end of the day, if a customer wants a “real girl” he can find plenty. If he wants to have a pixel girlfriend or a phone hoe, he can find plenty of those too.  It’s weird to me for anyone in this industry to be concerning themselves with what other people are doing.  Especially when being a nosy cunt doesn’t pay your bills… being good at what you do, is what pays your bills. If your custie likes your style and they are paying you, keep collecting your checks and move along.

Yall obviously were not around in the wild wild west of the internet, when people were catfishing before it was called catfishing, and I was one of many people who got their pictures stolen and had someone impersonating me in a live chatroom.  And nobody was paying them to do any of that. Nor was I working in the sex industry at the time.  I was just a cute, brown skinned, twenty something that men fawned over. Now I’m a plump, MILF HypnoDomme and I’ve had people on SL try to copy my avatar. That’s another story for another day.

Anyway thanks for coming to my TED talk.  TL;DR Mind the business that pays you. Stop shaming “catfishers” and SWers who don’t show their real life, and especially don’t waste your breath shaming hoes on virtual.  If you want to get off on the very real voice of an Ebony mindfuck Goddess, call me on Niteflirt.

Call me on Niteflirt

Leave me a tribute 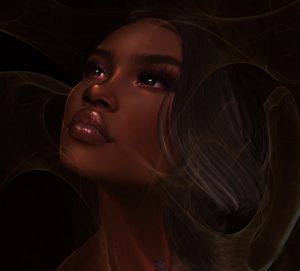 There are some mfers on this earth that clearly do not know how to read the mfing room.

If I have to think about blocking someone, we're already circling the drain. And when it comes to my mental health, I'm always going to choose me.

Sound on.🔊 Now be a good boi and go buy my videos on loyal fans. Link in comments. ⬇🔗 LoyalFans onlyloyalfans EbonyGoddessMindfuck

Let's make some goofy faces together.
Tag your it 🤪